Breaker Breaker 1-9 you got a copy?

What’s in the box, building a blockbuster brokerage and trucker trivia – WTT

Supply chain issues are coming for your beer – WTT newsletter

Welcome to the WHAT THE TRUCK?!? newsletter. In this issue, CO2 shortages strike breweries; Senate bill proposes $40K tax credit for electric semis; dog days of the spot market; and more.

Somewhat stable — You may be wondering why I haven’t talked much about the dry van spot market lately, and the truth is it’s been in a start-stall slump since May. When you’re getting less than a bottle of Two-Buck Chuck a mile, you gotta look on the bright side of the bottom: stability and normalization which sure beats a steady systematic decline. The spread between spot and contract rates is as wide as the San Andreas Fault at 94 cents. FreightWaves’ Michael Rudolph reports, “While I do not foresee contract rates dropping below linehaul spot rates before Q1 2023 (at the earliest), shippers might be especially aggressive in their Q4 renegotiations.”

Speaking of spreads — FreightWaves CEO and founder Craig Fuller recently tweeted, “The spread between retail and wholesale diesel prices is pretty insane right now. Small truckers pay retail, large carriers pay wholesale. Fuel surcharges are indexed to retail. Large carriers are making bank right now.” He isn’t kidding. While that does nothing for small carriers who’ve been crushed by low rates and high fuel for months on end, the silver lining is retail is starting to see steady declines as well. 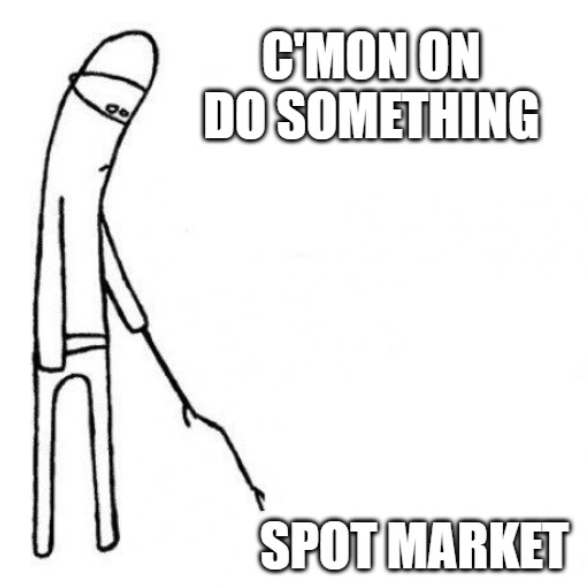 And then the supply chain issues came for your beer

Cno2 —I’d tell you to go cry in your beer, but those seem to be in short supply as a CO2 shortage is threatening the survival of some small and local breweries. Everett, Massachusetts-based Night Shift Brewing took to Instagram on Tuesday to announce that the CO2 shortfall has cost the company’s 12-person production team their jobs. To Night Shift’s credit, they’re paying those employees through Oct. 1.

“Breweries depend on CO2 to make beer, so this was pretty awful news to get. Seems like this will be an issue that impacts a lot of local breweries, so we’re probably one of many breweries facing this new threat to our business.” — Night Shift Brewing on the gram

Where’d the CO2 go? — Apparently, the issue stems from contaminated raw gas being sent to CO2 firms for purification. Gasworld reports, “There are a number of ways that CO2 can become contaminated by other compounds, such as oil and grease vapor, rust and pipe scale and plasticiser compounds.” On top of that, there’s less capacity for production as ammonia/fertilizer plants have had to deal with their own shutdowns.

“I work at a brewery in Boston and we’re pretty much on emergency CO2 delivery only, there just isn’t that much to go around. — A poster on Reddit’s r/Boston forum

Cover story? — How many times have you come across businesses using the supply chain as an excuse for other shortfalls? Good Beer Hunting alleges that Night Shift Brewing’s issues may extend well beyond a CO2 shortfall. The blog lists a failed expansion into Philadelphia, high marketing budget and a brewing facility with no room for growth that led company leaders to propose this move to Jack Abby’s facility back in January.

So, all clear on the CO2? — Nope, it is still a big issue that extends well outside of our borders. Brewers in the U.K. and New Zealand have reported similar shortages. Even this splash park had to shut down as it uses CO2 to treat its water. What’s unfortunate is that just like in trucking, it’s the small guys who get canned first when costs soar.

Big bucks back on battery trucks

How’s that BEV semi look now? — Ignoring the fact that the Tesla Semi is in a perpetual state of postponement, this $40,000 tax credit is good news for carriers looking to get battery electric vehicles from other manufacturers. Speaking of Tesla, among changes to the new Senate bill is that Elon Musk no longer has to go goblin mode as the $4,500 bonus credit to union-made EVs that benefited Ford and GM over Tesla has been removed. There are a number of other credits for buying noncommercial EVs, and the program would run until Dec. 31, 2032. For a snappy breakdown of what’s included, check out this thread.

Hold up a minute — Makes you wonder, though, are these incentives even needed? Try buying an EV four-wheeler right now, not to mention a semi, and tell me how long the waitlist is. I do like the speculation by some that Tesla struck a deal to remove the union credit by offering to open up its chargers to all EVs. Another issue here is that this seemingly does nothing to increase supply but will most certainly create demand … how and when that is met is still anyone’s guess.

I suppose in the meantime, these credits could make dealer markups more palatable, though I think we’d all prefer if inventory availability drove prices down. The CHIPS Act did pass the House on Thursday, and if that goes through that certainly could help with getting all these EVs off the lot.

CubeSat’s rideshare to space featuring NASA — Problem: You want to study space but that rocket ship in your barn has about as much lift to it as The Dude delivering a jumping high five.

Plus, a look at cross-border with Carlos Barahona of Universal Logistics Services, and Netradyne’s Nick Grome shares the latest in dashcam tech.

Has Nikola turned a corner?

Question of the week

What’s the worst delivery location you’ve ever seen? — There’s a very dangerous combination of elements in that image above. Some may find it disconcerting to be stuck at a dock while tied to the train tracks like a damsel in distress in the Wild West … but here we are. What’s the worst dock you’ve seen? Email me here and best answer gets a WTT hat.

Read the latest on Back The Truck Up

Breaker Breaker 1-9 you got a copy?

What’s in the box, building a blockbuster brokerage and trucker trivia – WTT

Living life while Married 2 The Road